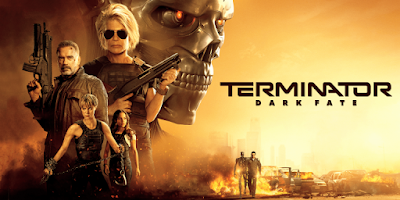 I thoroughly enjoyed it, it completely delivers what a Terminator movie should be and it’s one of the best action movies of the year.


Now some context, T2 is one of my favourite films of all time (second only to The Matrix) and I also love the first movie. However the films in-between have left a lot to be desired, I hated Terminator 3: Rise of the Machines, it never felt like a true Terminator film to me, it lost the hard edge, the action was boring, a recast John Conner fell flat to me, and it ultimately felt like a TV movie. Terminator: Salvation tried something new, by purely focusing on the future war, but it’s a fairly bland and generic sci-fi war film. To be honest I don’t mind Terminator: Genysis, and at the time I thought it was the closest we were going to get to a half-decent Terminator film in the 21st Century and I appreciated the twist on alternate timelines (but it’s still not great).

Terminator Dark Fate shows us what a follow-up to Terminator 2: Judgement Day always should have been, I feel pretty lucky to live in a world where a movie studio can wipe the slate clean, and deliver a “true” sequel to one of the greatest movies of all time. The other movies now feel like fan fiction, and as far as I’m concerned there are only 3 Terminator films. The Terminator, T2: Judgement Day and Dark Fate, and the glue that pulls them altogether… Sarah Connor / Linda Hamilton (and of course James Cameron).

I’ve seen a lot of reviews refer to Terminator: Dark Fate as “The Force Awakens” of Terminator movies, which isn’t technically wrong, as it follows the same blueprint. It takes all the familiar elements of the classic films, brings back the original cast and reinvigorates the franchise with a “cannon” sequel. However in terms of quality, I think a better example is Jurassic Park v Jurassic World. Why? Well personally, I like “The Force Awakens” more than the originals (blasphemous I know), whereas although I really enjoyed Dark Fate, I don’t think it’s anywhere near the classic of Terminator 2: Judgement Day. As with Jurassic World, all the elements you’d expect from the franchise are here, but there’s just something slightly amiss that stops it being on the same level.

Both Jurassic Park and T2 were true game changers, not only did they deliver something audiences had never seen before in terms of innovation they also told classic stories that stand the test of time. A sequel is unlikely to ever reach those heights, so although they’re both great – don’t go in expecting T2 quality here. I imagine “The Matrix 4” will sit in similar territory in comparison to the original.

That’s probably me being overly critical, but Terminator 2 is one of my favourite films of all time, it’s something I saw when I was eight and has stuck with me ever since. Any movie would be hard pressed to top it.

But the short of it is – Terminator Dark Fate is a genuinely good movie, and any Terminator fan should enjoy it.

Linda Hamilton returns as Sarah Connor and she’s absolutely great, we’ve seen stars return to characters made famous in the 80s/90s before for 21st Century sequels and they fall flat (Harrison Ford and Bruce Willis I’m looking at you…). Hamilton absolutely nails Sarah Connor, she’s obviously changed as her character is almost 30 years older (and has gone through some shit), but you can see how she’d get to this point. Her entrance is  much more heroic and bombastic than Schwarzenegger’s (which is very subdued).

Arnie is great, returning as a T-800, a role he’s mastered long ago. He’s not really in the film that much, not turning up until well after the midway point. But that’s not actually a bad thing, as Sarah Connor and the new cast more than hold their own.

The new cast are also really strong, both Mackenzie Davis’s Grace and Natalia Reyes’ Dani are great in their respective protector / protectee roles, and as a result I didn’t miss Arnie’s absence from the first half. It’s good to have young blood in the franchise and Grace kicks some serious ass throughout the film.

I wouldn’t say Gabriel Luna’s performance as the new Terminator (a Rev9) is a weak link, but as with the film in general he’s nowhere near as iconic as Robert Patrick’s T-1000 from T2. The role requires a reserved performance and he delivers that perfectly fine,  but as a result he doesn’t standout compared to Grace and Dani who get much more “human” performances to play with. I did really like the concept of the Rev9 and that felt genuinely new, a cyborg endoskeleton with a liquid metal shell that can separate into two separate entities makes some exciting and interesting sequences. To be honest I wish I hadn’t known this prior to seeing the movie as you miss the thrill of seeing it for the first time.

In fact I wish I hadn’t seen any trailers for this movie, although they didn’t give a way any story specific elements, they do include a lot of shots from different scenes, and therefore I found myself thinking “well they’re going to be ok here because  X and Y still needs to happen, etc” – not a fault of the film, but did influence my viewing.

If I had one criticism of the film (outside of the obvious that it’s not as good as T2), is that some of the action sequences looked a little two green-screeny or CGI heavy. There’s a scene involving an air carriers which is obviously CGI so fair enough, but it was specifically noticeable in a few scenes towards the start of the film which were set in every day locations. Don’t get me wrong the staging and creativity in these sequences are very impressive, so they’re fun to watch -  but for whatever reason appears a lot of green screen was used and I definitely noticed it.

Without going into spoilers that’s probably it for my thoughts on Terminator Dark Fate.

Highly recommended, especially for any Terminator fans who may have given up on the franchise based on the previous few.