Once Upon A Time... In Hollywood - My MIxed Thoughts

I’ve got out of the habit of writing movie reviews on MoviePush, but after seeing “Once Upon A Time… In Hollywood” I felt I just had to write my thoughts down. 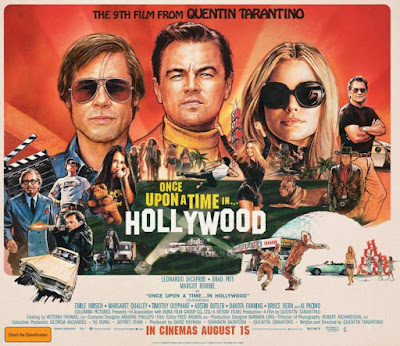 I have mixed feelings on this movie, I really enjoyed OUATIH but at the same time I’m not sure if it’s one of my least favourite Quentin Tarantino films, which is a ridiculous statement to make, but it’s just so hard to grapple with.

I really can’t say more without getting into spoilers...

Similar to Inglorious Basterds, which told a fictional story against the backdrop of an actual event in history, OUATIH poses the question “On the fateful night of Sharon Tate’s murder, what if the Manson family cult went to her next door neighbour’s house instead?” That is essentially the conceit of the movie, but it doesn’t reveal that until almost the very end.

The first two and half hours tell the story of the aforementioned next door neighbour, Rick Dalton (Leonardo DiCaprio) an actor trying to prolong his career and his best friend / stuntman Cliff Booth (Brad Pitt). Both leads deliver incredible performances, and it’s really enjoyable to watch them interact with each other (and other movie stars of the era). But there’s always that over-riding waiting for “the incident” to happen that lingers throughout the film. However, whereas Basterds can be enjoyed without the viewer having any prior knowledge of a specific event, I'm not sure OUATIH can.

And that is ultimately why I’m struggling to decide whether this is actually a good movie or not. As it relies on you knowing the true events, so that it can then subvert them. If you look at this movie without the external context, the character of Sharon Tate serves no purpose in the films narrative, she’s a character in the background that is only there to play with audiences expectations. If this was a completely fictional story, she wouldn’t be in the film, or at least there would be more scenes leading the audience to suspect she was going play a bigger part, she has no bearing on the plot and little to no interaction with the film’s leads or it’s narrative.

The whole movie is an almost 3 hour bait and switch that somewhat relies on the viewer expecting the real life events to be depicted. The film itself provides very little set-up to even indicate the film might be leading to an event like this, it literally comes out of the blue. Hell, even 3 of the 4 Manson family in the finale aren’t introduced until the final act itself, most films would have had least set them up in some capacity. So it' s challenging even from a fundamental story-telling perspective.

That brings us onto the narrative and the structure of the film, the story is told over 3 days, but the movie is in no way split into the traditional 3 act structure. Two of the days are back to back and take up most of the films runtime, and then the third day jumps 6 months into the future and unfolds with jump cuts and a narrator. This is like no movie I’ve ever seen, I mean there are scenes that are literally over 10 minutes longs, which are scenes from in-world movies being filmed, that have no bearing on the plot of the actual film yet we spend extended amounts of time with them. No other director would have the balls to do this, this is definitely Tarantino at his most self-indulgent.

And I know the above is a lot of criticism of the movie, but I genuinely enjoyed it. The world building is incredible, it feels like it was actually shot in the 60s, the acting is great, especially from the two leads and the final 20 minutes. Wow. Absolutely exhilarating, shockingly violent and laugh out loud funny – it’s a blast!!

So yeah, I appreciate QT making something different, something original, subverting expectations with characters I liked spending time with and just watching live out their daily lives.

But is this structurally / technically a good film?
Does it even work without knowing the real life events?
Is this one of Quentin Tarantino's greatest or worst films?
Is it too self indulgent?
Does any of that even matter if I ultimately enjoyed my time watching it?

I don’t know, definitely a film I need to sit with and ponder before I make my mind up, but then if a movie has left such an impact I'm still thinking about it, that's a good sign, right?

Email ThisBlogThis!Share to TwitterShare to FacebookShare to Pinterest
Labels: Movie Review, Once Upon A Time... In Hollywood, Quentin Tarantino