Spider-Man Far From Home - My Thoughts

We’re finally here, the “real” conclusion of Phase 3 of the Marvel Cinematic Universe with Spider-Man Far From Home. 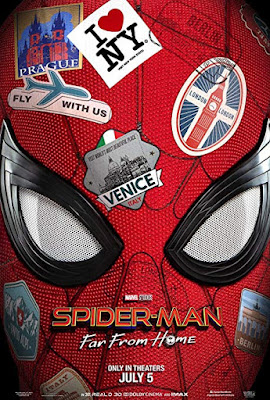 So my overall thoughts… with SPOILERS from the start.

When I first came out of the cinema, I felt the first half was quite slow (and I was surprised how little costumed Spidey was in it), however I absolutely loved the second half, for me it’s really once the Mysterio twist happens (and Jake Gyllenhaal lets loose with his insane acting) that it all comes together. The action also get more intense and much more inventive as a result.

Let me expand on that, so the first half felt a bit clunky for me – it’s a lot of set-up that jumps around and there’s no real Spidey action, there is a cut scene in the trailer where Spidey takes on some thugs in a restaurant and I think the film could have really benefited from that being included. I get that from a time perspective, it was probably edited to get the European trip started as soon as possible, but seeing Peter / Spidey in New York before leaving would have been a nice contrast, and I can’t imagine it would of lasted more than a few minutes anyway. Jon Watt’s said that sequence (together with Peter getting is passport for the trip) is completed and will feature on the blu-ray as short film. Hopefully there’s also an option to incorporate it within the actual film.

A few other things, I didn’t really gel with how Nick Fury was acting, he seemed overly aggressive and short with Peter, which just seemed off to me. Now seeing the final post-credit scene and the Skull reveal  it makes sense, however on a first viewing it wasn’t working for me so I kept questioning it. Likewise, with Quentin Beck / Mysterio, anyone whose read the comics know there’s a twist coming, so again all the Mysterio scenes early on I was second guessing.

It’s also just really odd to see a Spider-Man story that’s not set in New York, again I get why the studio wanted to do something different, but Spider-Man swinging in Manhattan is so intricate to this character / story that when it’s not there, it feels odd. In fact the final few moments of the film, when we see Spidey swinging through New York made me realise how much I’m dying to see the Tom Holland version of Peter Parker / Spider-Man actually have a film set in the city of New York (Homecoming was very much in the suburbs).

So that sounds like criticism, but it’s really not – it’s just for the first hour of the film I was thinking this is “ok to good,” but then the 2nd half really kicks into gear and I absolutely loved it. The film really changes the second the Mysterio reveal happens, Jake Gyllenhaal performance (which had been played very straight until this point) immediately transforms and becomes a hell of a lot of fun. His Mysterio is pitch perfect, and one of the best comic book villain adaptions brought to the big screen.

Also, once the trickery involved in Mysterio’s schemes are revealed the encounters with Spider-Man become a million times more inventive and exciting (probably another thing that bothered me about the first half is that fighting giant CGI monsters just isn’t that exciting). The main illusion sequence is absolutely breath-taking, so many inventive visuals. Skeleton Iron Man…? 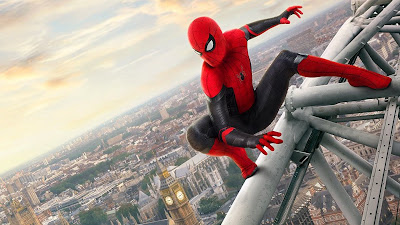 Tom Holland continues to be the perfect actor to balance both Peter Parker / Spider-Man and he again delivers an amazing performance, with all the supporting cast (especially MJ and Ned) being just as great as they were in Homecoming. Like I said earlier, I had some issues with Sam Jackson’s Nick Fury, but that’s somewhat acknowledged by the post-credit scene revealing it wasn’t really him.

From visual effects / action perspective, this is all great, but again the 2nd half is just so much better, the sequence in Venice has a few dodgey digital double shots which pulled me out of the moment, but once we get costumed Spidey fighting the real Mysterio it all just comes to life. The London sequence is also spectacular – absolutely loved it.

On that point, I loved how the Mysterio illusions were created in the context of the universe and call backs to earlier MCU films, to show all this tech already existed in some form. A mix of holograms and drones - really clever stuff.

There’s been a lot of marketing talk recently from Marvel Studios head Kevin Feige about how Spider-Man Far From Home is the “real” conclusion to Phase 3 of the MCU and caps off Avengers: Endgame, however originally it had been positioned as the 1st film of Phase 4. Now having seen it, it most definitely feels like a film that is kicking off a new Phase of the MCU, obviously there’s threads from Endgame (the impact of the snap and Tony Stark’s death are central story elements), but Endgame felt like a conclusion. FFH feels like set-up, it even ends on a literal cliff-hanger for peeps sake!

On that point I have no idea how the third film is going to work based on that ending! I could see how the (re)introduction of J Jonah Jameson and then the framing of Spider-Man for Mysterio’s death was going to play out in a very traditional way for the character, but to have his secret identity revealed when he’s still a school kid?? Part of the fun of Spider-Man stories is the dynamics and challenges he has in his personal and superhero life, I can’t see how that can still happen now. As Spidey said “What the F?!.”

So, with all these movies I’ve got plenty more to say, but think that’s enough for my review now. In summary, I really liked to loved this film (especially the second half), it’s probably not as high on my list as Homecoming but it’s still one hell of Spider-Man film. I definitely want to see it again, as a lot of my issues with the first half were explained by the end, but for a first viewing experience it probably influenced my feelings more than it should.

Irrespective, it’s still one of the best Spider-Man movies ever made.

Side note - on reflections there’s also quite a few similarities with Iron Man 3 (however I think Far From Home is a much stronger film!). The main being… the hero is dealing with the aftermath of a huge crossover event, he’s also taken out of his local setting for majority of the film, the main villain has a twist reveal, and our hero is rarely in his traditional costume until the 3rd act of the movie. Not that this really means anything, but just an observation.