It’s all been leading to this… the Marvel Cinematic Universe culminates with Avengers: INFINITY WAR. Here’s my spoiler-free review… 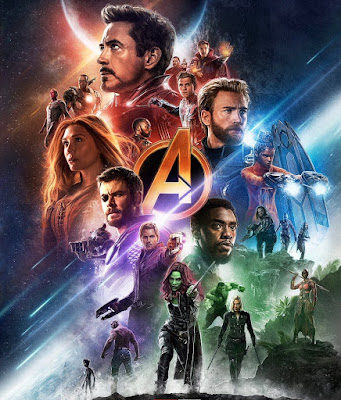 First things first, Avengers: INFINITY WAR doesn’t play like a traditional movie, but let’s be honest there’s no way it could. A movie on this scale with this many characters has never been attempted before. As a result, it’s more in line with a penultimate episode in a long running TV series with a huge cast, and it most definitely is the PENULTIMATE episode (not the finale). As each MCU movie is essentially the next chapter in an on-going story this is to be expected.

I really liked it, however, I do wonder how it will play to people not up to speed with the MCU, it’s the first Marvel Studios movie I’d say that you do need to watch some of the previous entries first (even Thor Ragnarok’s mid-credit scene is required viewing). So having rewatched all the MCU movies over the last few months for Road To Infinity War, I was completely up to speed and everything was fresh in my memory. I definitely think this enriched my viewing experience, there are so many throw backs and pay offs from previous films I had a grin on my face from start to finish. However the film spends minimal time reintroducing characters or explaining where they are (and why) at the start which could be jarring for new viewers.

The structure of the film follows multiple groups of characters, and as a result there isn’t really a lead protagonist for the movie. This is unlike the other big MCU cross-over events which despite including multiple characters, tend to primarily follow two characters, I’d say across both previous Avengers movies and Captain America: Civil War this has been Steve Rogers and Tony Stark. Steve and Tony still feature prominently, but you also have Thor, Doctor Strange, Star Lord, Gamora taking very prominent roles in core strands of the narrative and of course Thanos features heavily, all the other characters fit around them. To be honest I felt like Thor and Doctor Strange probably had the most screentime of all the heroes, and Steve Rogers definitely had a bit less than I expected.

Due to the huge cast of characters, there are multiple scenes of new character meeting and interacting with each other and these are all amazing. The dialogue and interplay is so witty and fun, the Guardians meeting Thor and then a subset of the Guardians meeting Iron Man, Spider-Man and Strange are particular stand-outs. Drax remains a stand-out for comedic timing.

Amazingly for a film that features so many characters, each person gets a chance to shine with key action beats or witty one-liners. However the result of so many characters being balanced, means there isn’t a huge amount of time dedicated to one characters emotional through line, Thanos is probably the lead in most respects. So the emotional stakes very much relies on your existing relationship with the characters from previous films.

The spectacle and action sequences are absolutely incredible with a huge variety of characters abilities and environments on display. However, I was surprised that there wasn’t an iconic shot that included all of our heroes fighting together ala the spinning camera shot in both Avengers movies. You may be saying what about the shot in the trailer of most of them all running towards the camera? Well, umm, it’s not in the movie… Marvel Studios seem to be getting in the habit of including iconic hero shots in trailers that aren’t in the movie.
I’ve specifically avoided any story details and I recommend you see the movie as spoiler-free as possible. However if you’ve read my Avengers: INFINITY WAR predictions, I may have indirectly spoiled it as I got a lot of it right! My plan is to watch the movie again before I do a spoiler-filled thought on Avengers: INFINITY WAR blog post.

Overall, I really enjoyed Avengers: INFINITY WAR, but it is very much Part 1 of a 2 part story (despite what Marvel Studios said when the films were in production). As a result it lacks a satisfying and uplifting conclusion, which is unheard of for a Marvel Studios movie. It definitely ends it's main narrative thread and is told across a complete 3 act structure, but it leaves me anticipating next year’s true culmination and conclusion of the Marvel Cinematic Universe even more!

It’s going to be excruciating wait for Avengers 4!

UPDATE - 27/04/18 - Some Additional Points After A 2nd Viewing
I saw INFINITY WAR again and loved it even more, as a result I don't think my above review praises the movie enough. So here's a few additional points....

I can't understate how masterful this movie handle this many characters, it truly is a masterclass of storytelling and really puts other ensemble cast movies to shame. As with the first Avengers movie, the benefit of Marvel Studios taking the time to introduce characters in their own movies first pays dividends. The story flows really well and although it jumps around alot it never feels jarring.

Thanos is an absolutely incredible antagonist, as with Black Panther's Kilmonger, we once again have a relatable villain. His plan to get all the Infinity Stones is straightforward, but his reasoning makes complete sense and to a certain extent understandable. I was worried that having a completely CGI villain would take away from the performance, but it doesn't.

I did definitely notice the lack of screen time dedicated to Steve Rogers on a 2nd viewing, which is a shame as he's one of my favourite characters, but it makes sense as he's not directly linked to any of the Infinity Stones or Thanos.

Also, there's a huge amount of shots in the trailer that are not in the film, I'm not sure whether this indicates a longer cut of the movie or whether Marvel intentionally used alternate images in the trailer to avoid spoilers. Probably a bit of both...

Either way I absolutely loved Avengers: INFINITY WAR on a 2nd viewing and it ranks very highly  in the MCU.