The sequel to Pacific Rim finally hits the big screen, some five years after the original, minus Guillermo Del Toro in the directing chair. 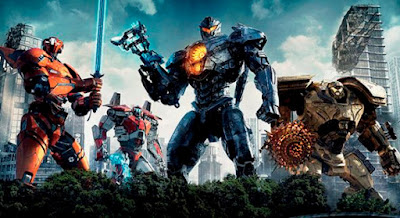 So what did I think of Pacific Rim Uprising?

Short thoughts – is it the best movie ever? No. Is it a lot of fun with some amazing over-the-top giant robot vs giant monster/robot fight sequences. Yes.

So yeah, I enjoyed Pacific Rim Uprising, for me it delivered exactly what it’s movie marketing promised. Some big scale action between mechs and Kaiju, with lots of spectacle and destruction. This is the type of movie that HAS TO BE SEEN in the cinema. The sheer scale and size of the mechs / kaiju just can't be appreciated on a small screen.

The plot is fairly straightforward, yet features a few little twists (that I didn’t see coming) and the movie tells its story at a brisk pace. It’s nice to get a movie featuring giant robots that’s less than 2 hours (looking at you Transformers). Arguably it’s narrative isn’t doing anything particularly new, but it services the film well and moves us from each action sequence. Speaking of…

I really enjoyed the action sequences, and there was quite a lot of variety in them, so the film never felt like it was repeating itself. The opening mini-mech chase was fun, the mech v mech fight in Sydney was awesome, a second mech v mech fight in snow and ice was great, and then the final act of multi-mech v multi-Kaiju in Tokyo was smashing (literally).  I also really appreciated that most of these sequences took place in broad daylight so you could actually see what was going on, one of my issues with the original was it pretty much all happened at night.

John Boyega owns the lead role and holds the movie together on his charisma, Cailee Spaeny also puts in great work as an orphaned teen who Boyega takes under his wing.

As with the original, Pacific Rim Uprising is really like an anime come to live, and I hope it does well enough at the box-office that we get another sequel (sooner rather than later).

Compared to the original, Uprising is definitely more fun and focused on the spectacle, it spends less time on the philosophy and taking itself seriously. I do really like the first film though (here's my original Pacific Rim movie review). As a result, I’m touch and go about which one I prefer, however as this is ultimately a franchise about about big robots fighting big monsters, I think I’d lean towards the sequel which is more fun.

I appreciate Pacific Rim Uprising won't be for everyone, yet if it is your thing I highly recommend you go and see it on the biggest screen you can (don’t wait to watch it at home).