Guardians of the Galaxy – Road To Infinity War Review

Marvel’s first movie that expanded into outer-space, where the Marvel Cinematic Universe quite literally started exploring “the universe”, yes, Road to Infinity War has reached Guardians of the Galaxy. 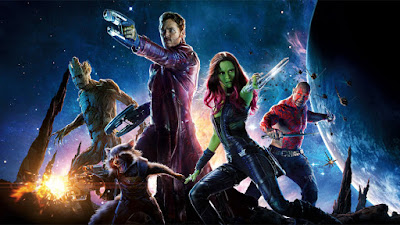 Another Marvel Studios movie that just get better every time I watch it. I’m not a huge sci-fi fan, but what makes Guardians of the Galaxy so good is it’s cast of characters, and they’re endlessly rewatchable.

The core team are all brilliant, there isn’t one that outshines the other, each is unique and quirky in their own way; Drax’s dry sense of humour, Groot’s child-like innocence, Rocket’s attitude, Star-Lord’s swagger and charisma.  Arguably, Gamora is the weakest link, but that’s only because she’s the most straight of the characters, though she more than makes up for that in bad-assery.

GotG is technically even more impressive than The Avengers in terms of film structure and balancing it’s team of characters. Whereas The Avengers had the luxury of (most of) the characters being introduced in their own solo movies first, GotG introduces all of them naturally into its own narrative and still tells a cohesive story over a 3 act structure in under 2 hours, it’s really great stuff.

It seems redundant to point out how great of a soundtrack the movie has now, but remember at the time of release it was a novelty to hear 70s / 80s pop rock in a comicbook movie. Anyway it still stands up and generally adds to the feel good nature of the movie.

Thanos gets his first full-scene cameo in the MCU and although he doesn’t do anything particularly intimidating it’s great to see him in the (purple) flesh. We also get our first (expanded) explanation of the Infinity Stones (thanks to The Collector), so as with Captain America: The Winter Soldier and Thor: The Dark World it really feels like the bigger over-arching MCU story is coming into play.

Although it may not be my favourite movie in the MCU, Guardians of the Galaxy is definitely one of the best films in the MCU (as if you didn’t know that already).

NB – Can you believe GOTG and Captain America: The Winter Soldier were released in the same year?!