I know this is a bit late, as I usually like to get a movie reviews up within a few days of release, however for various reasons I’ve only just got around to watching the live action version of FullMetal Alchemist on Netflix this weekend. 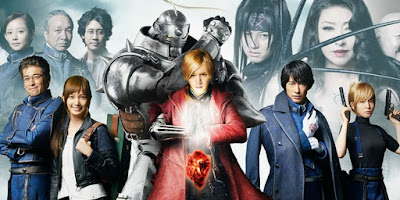 Read on for the review.


Live action adaptions of anime’s are extremely difficult to get right. I wouldn’t even say they’re hit and miss, because the vast majority tend not to be very good. Saying that I did enjoy last year’s Ghost in the Shell and Death Note movies, neither are perfect but they’re not as bad as film critics and the vocal minority would have you believe.

I think the main problem tends to be that most good anime / manga’s tell their stories over multiple episodes / issues, and condensing the story into a 2 hour movie generally results in an abridged version of the narrative that feels lacking. Combined with the fact that if they’re being faithful to the characters anime look, it’s hard for the characters to not just end up looking like high-quality cosplay costumes.

So how does the live action version of FullMetal Alchemist fare?

Firstly, the cosplay issue does definitely come into effect, especially for lead Edward Elric with his bright red coat and bleach-blonde hair. However, his brother Alphonse in his hollow armour actually looks really good, and is exactly what I’d imagine a live-action version of him to look like. The other characters look ok, as most wear military uniforms or regular clothes. The 3 main villains Lust, Envy and Gluttony have mixed results, Gluttony looks great, but Envy looks a bit fake (especially the hair!). However, the look of the characters doesn’t really matter if the story isn’t up to scratch.

So does FullMetal Alchemist overcome the usual anime adaption issues?

Well, I haven’t read the manga, but I’ve recently watched the full (5 seasons) anime series FullMetal Alchemist: Brotherhood (which adapts the manga very faithfully) so I’ll base my thoughts on that. Rather than adapt the full story arc and condense it into 1 feature, the film’s story only really covers the first season but pulls in some elements from later seasons to give the film a suitable climax. This is a wise choice overall, but still results in about 5-6 hours of storytelling be reduced to 2 hours.

Being fairly familiar with the source material, I do wonder if I’m a bit bias when rating the film as even though the film was skipping over and rushing through things, I found myself filling in the gaps from my prior knowledge. As a result I didn’t get confused and could follow the story but I’m not sure how someone completely new to the franchise would keep up.

I’m also not sure if the plan is to make a series of films to adapt the whole story, as there are parts of the original narrative (and characters) that aren’t even touched on here. But I enjoyed the movie enough that I’d definitely watch a series (or trilogy) of films adapting it to live action.

I did also really like the action and special effects used for the film, they look great and it’s cool to see the alchemy and spells come to life on the big screen.

So overall I enjoyed FullMetal Alchemist, and I’d recommend it to existing fans, yet I’m unsure how much you’d get from it if you’re not familiar with the source material.