The Road to Infinity War continues, and following Iron Man 3 we’re now onto the Thor sequel, Thor: The Dark World. 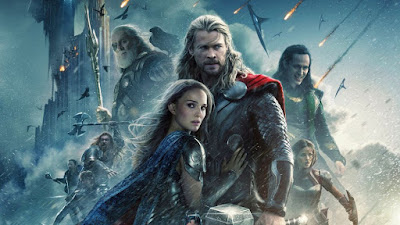 So is Thor: The Dark World as bad as everyone says it is?

I’ve said it before and I’ll say it again, I like Thor: The Dark World, I actually really enjoy it. Yet, it is consistently listed and referenced as the worst Marvel Studio’s movie in the Marvel Cinematic Universe. I honestly don’t get it, the year it came out I enjoyed it more than Iron Man 3 (my original review is here) and re-watching it I stand by that. I read a lot of movie websites and listen to podcasts and the general consensus is always that Thor: The Dark World is a bad movie.

The main criticism is usually aimed at the films antagonist Malekith (played by Christopher Eccleston) as being undeveloped. Fair play to a certain extent, however this is hardly an issue specific to Thor: The Dark World, and in my opinion his motivations are pretty clear and serve the story fine.

The film has a clear 3 act structure, a MacGuffin  that drives the plot, a great cast, some decent action, good emotional & comedic moments, and Thor and Loki continue to be incredibly fun to watch, especially when interacting with one another, but the main villain is slightly undeveloped. However that sounds like a pretty standard MCU movie to me, and they’re all entertaining and enjoyable. So yes, it doesn’t break the mould and try anything new, but that doesn’t make it a bad film, it’s just a solid entertaining one.

As a lot of people are re-watching the MCU movies on the lead up to Avengers: Infinity War, I do wonder if some of them will be pleasantly surprised and realise it’s not that bad.

For me, Thor: The Dark World remains an entertaining movie in the MCU and is in no way as bad as people say it is.