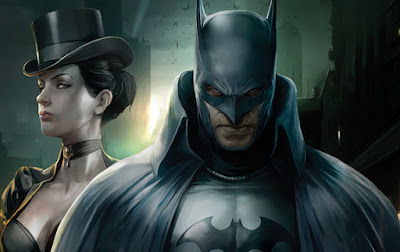 Sounds great, but is it any good?

Batman: Gotham By Gaslight re-imagines Batman as a vigilante in a Victorian-era Gotham City where he takes on Jack the Ripper. The setting is novel, but works extremely well for a Batman story and the concept never really gets in the way of the plot. Gotham By Gaslight is really just a solid Batman investigation and Jack the Ripper fits extremely well as an antagonist for him.

Gotham By Gaslight is an adaption of the one-shot graphic novel by Brian Augustyn (which I hadn’t read to be fair), but based on the books plot summary on Wikipedia it does look like elements of the story have been changed when bringing it to the screen.

All the standard Batman elements are here though; Bruce Wayne has a rich playboy persona in  public, yet sneaks out at night as Batman fighting crime, Alfred plays the protective but supportive butler, Selina Kyle runs and leads a theatre production but is still very much the strong female character you know, Commissioner Gordon and Harvey Dent likewise. There’s also some smaller cameo appearances from Poison Ivy and Dr Hugo Strange. As I said, the setting may be different, but Gotham By Gaslight tells a fairly traditional Batman story, and very much features the standard depictions of characters you’d expect.

As with most of the DC Universe Animated Original Movies, the animation is very much in keeping with the DC animation look which goes back to the 90s Batman: The Animated Series style. This is fine and it services the story, but it’s not on the level of other modern animation (especially Japanese anime). This isn’t a complaint, just an observation.

I was surprised at the level of violence and blood in some scenes, especially the Jack The Ripper killings, although not explicit, the use of camera angles and repetition of stabbing action combined with blood splatters felt quite visceral. This is obviously effective film-making, but it did shock me. I think part of the reason was I didn’t realise the movie was a (15) and when it initially happened, I did think “I’m surprised they’re showing that in (PG)”.

Overall I really enjoyed Gotham By Gaslight, but if I had any criticism of the film it would be that it wraps up too quickly and leaves a few loose ends. Without going into spoilers, within a minute of the villain being defeated (shock Batman wins) the credits roll. I feel the film could have done with a couple of extra scenes to clear up a few things. The most obvious is a character is wrongfully accused of the Ripper’s murders, and just because Batman defeats the Ripper it doesn’t necessarily prove this characters innocence, and we never see this resolved.

However, Batman: Gotham By Gaslight is still a solid Batman animated movie which I’d recommend you check out if you’re a Batman fan. Yet, even with the unique concept, it doesn’t really do anything ground-breaking, so not sure casual viewers need to rush out and see it.