We’re four (Thor?) movies in to MoviePush’s Road to Infinity War, and this time it’s  Thor’s first solo movie (and to some extent Loki’s). 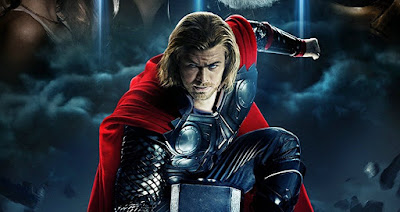 Thor has arguably gone through some of the biggest changes as the Marvel Cinematic Universe has developed, most obviously with Thor Ragnarok’s much more comedic take on the character. So how does it hold up?

Thor’s always been an interesting movie for me, I really like the Asgardian characters (Thor, Loki, Odin, etc) and I love the opening 20-30 minutes (basically everything set in Asgard, the battle with Frost giants and introducing the mythology). But I’m not a fan of the whole fish out of water trope, and once Thor gets banished to Earth the film feels a lot smaller and cheaper. So I had that very much in my mind whilst watching again and to a certain extent my original opinion stands.

Chris Hemsworth and Tom Hiddleston absolutely own the roles of Thor and Loki, respectively. Even at this early stage, you can see they're comfortable and were born to play these roles. The Asgard design and mythology is all great and this part of the story shines. But the characters and setting on Earth is still weak, not as bad as I remember it, but still  poor in comparison. It’s interesting to see that as the MCU and Thor movies have developed we’ve moved further away from this, with each movie spending less time on Earth and by Thor Ragnarok none of three Earth based characters make an appearance at all.

That’s what makes Thor such an odd movie for me, there are elements that I love and then other’s they just feel forced in. I get the fish out of water idea, it helps general audiences relate to a fairly outlandish concept and also helps keep the budget low. But I’ve always said I wish this movie was completely set around Asgard (or Nine Realms based) .

There are two scenes that I absolutely love in Thor, that in my opinion are some of the most emotionally dramatic we’ve got in the MCU and really shows off the calibre of the actors involved. The first is when Thor and Odin clash and results in Thor’s banishment. The second, Loki confronting Odin about his true heritage is gut-wrenching, and Tom Hiddleston delivers a knock out performance from a broken son. Two truly great scenes, and some of the MCU’s best.

It’s also interesting in hindsight watching Loki based on what we know of the character in context now. How Loki acts and talks to Thor is so obviously manipulation, and is part of the tried and tested traits of the character, yet at the time watching this for the first time I remember thinking he had his brothers best interests at heart.

As is becoming apparent with all the early MCU movies, the films take their time to introduce the world and the characters, but then are all guilty of rushing the end to have some sort of climatic show down. I understand why this happens when trying to keep a film within 2 hours, but it does standout and stops any of the films being 10/10. At this stage all the Phase 1 MCU movies are good solid films, but haven’t quite reached the heights of what we know is to come…

Agent Coulson is obviously included to be the consistent link between the Phase 1 movies, and there’s a cameo from Jeremy Renner’s Hawkeye that stands out a bit, but this is still early days in the MCU and they’re finding their feet with how to make everything naturally fit together.

Also, what is going on with the dutch angles in this movie? I knew they were part of the movie, but they never really bothered me before, however re-watching it now I found it so distracting, nearly every other shot has the camera tilted on its side. It honestly took me out of the film for the first 5 minutes (when it’s particularly prominent).

All in all, Thor still stands as great introduction to he character and builds solid foundations for the core characters going forward. Next week is Captain America: The First Avenger!