Over the last week or so, there have been a string of promotional clips and trailers released for what is purported to be a new Crocodile Dundee movie. It’s not clear whether this would be a sequel or a reboot, but even more puzzling is whether or the not the movie is even real. 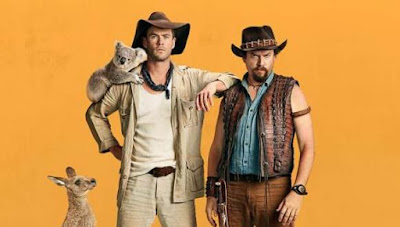 So is all the marketing for Dundee real or fake?

To be more specific this new “movie’s” full title is DUNDEE: The Son Of A Legend Returns Home, and supposedly tells the story of Crocodile Dundee’s long lost son Brian Dundee returning to Australia to find his dad who's gone missing in the Australian outback.

When I first saw that there was a promotional clip for an unannounced Crocodile Dundee sequel/reboot I quickly hunted it out. I have very fond memories of watching the original (and its sequel) during my childhood so I was intrigued. However, I was also sceptical, I’m not a fan of the slew of 80s reboots we’ve had in the last decade, with pretty much all of them being easily forgotten.

So I started watching the clips with some hesitation, however, whilst watching the clip it became apparent this was either a fake trailer, a very bad spoof or something entirely different. When Danny McBride turns around and does a poor imitation of “That’s not a knife” skit and alarm bells went off! The clip is below…
My first reaction was disbelief. This can’t possibly be real… I wasn’t sure if I was watching some great viral marketing promotion or I hated the fact they were so blatantly taking the piss out of such a classic scene.

Then shortly after we get another clip released, this one featuring Chris Hemsworth who seems very much in on the joke and how ridiculous Danny McBride is in the “so-called role” of Brian Dundee.
A third clip than followed, which to be fair was actually quite funny and again a rift on a famous scene from the original.
Things then got even crazier with Hugh Jackman tweeting a 10 second promo and then last night we a get full blow “Cast Announcement Trailer” which features some of the biggest names in entertainment from Australia, including Russel Crowe, Margot Robbie, Isla Fisher, as well as Chris Hemsworth and Hugh Jackman. Here it is: -
So is this real?

Or is it fake?

Is there really a Crocodile Dundee movie being released summer 2018 titled DUNDEE: The Son Of A Legend Returns Home featuring the above cast?

It is an elaborate viral marketing campaign for the Australian Tourism Board (Visit Australia) and it will culminate with a big reveal at the Superbowl.  It must have been an extremely expensive marketing stunt as well, unless all the stars did it for free(?).

What did you think? Great marketing? Or upset it’s not a real Crocodile Dundee movie?

If you’re interesting in the more marketing KPI and engagement scores of this campaign, then AdNews Australia have written up a great piece here.