2011 saw the release of both Thor and Captain America: The First Avenger, and having just re-reviewed Thor for Road To Infinity War, it’s now time to move on to Cap’s first solo adventure! 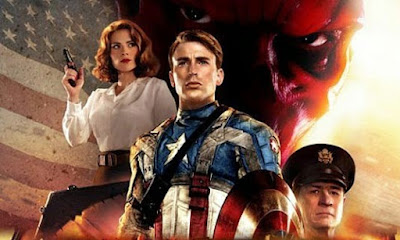 Captain America is currently my favourite Avenger (based on performances in both Avengers movies, Winter Soldier and Civil War) so I was really excited to revisit this movie. Here are my updated thoughts.


I absolutely loved it, I’ve always liked The First Avenger as I personally think it’s the strongest origin movie in the Marvel Cinematic Universe. Rewatching it, just re-affirmed that for me.

It’s extremely well structured, the origin story for Captain America fits perfectly with the wider narrative of the story, so the final confrontation between our hero and villain doesn’t feel rushed (ala Iron Man and Thor). I think the World War II setting helps with this, as it’s much easier to set up motivations for the good and bad, and we already have a fully formed villain in the Red Skull, so there’s no rushed origin story for him.

As with all the MCU movies, the lead is the definitive version of the character. Chris Evans absolutely nails the portrayal of Steve Rogers / Captain America. I can’t imagine anyone else in the role, and especially knowing how his character develops over the rest of the MCU it makes a great watch. I’m also extremely happy that the special effects for the small and skinny Steve stand up, and therefore don’t distract from his performance. There’s a sincerity to Steve Rogers heroism that’s been there since the start and here we see it in its truest form. Some of the early scenes when he’s discussing his motivation to fight in the war feel so genuine.

The supporting cast including Hayley Atwell, Hugo Weaving, Stanley Tucci and Tommy Lee Jones all do great work. I never really paid much attention to Sebastian Stan's Bucky Barnes in my original viewing, I assumed he was just cast to give Steve Rogers some motivations, yet again now knowing Marvel developed the Winter Soldier storyline, it’s great seeing the origins of this character.

When I first reviewed Captain America I had an issue with it because it felt like the film was incomplete and it didn’t really have an ending. As Steve’s sacrifice is almost glossed over and we skip to the present day for his re-awakening. At the time, I knew we had to get Captain America in place for The Avengers, but it bugged me that it made the film less standalone. Rewatching it now, I didn’t really have a problem with it, the film finds it’s natural conclusion and the present day scene feels like an extended post credit sequence. Maybe it’s the fact I’m just more conditioned to all the MCU films linking together and following on now (than I was in 2011), either way it elevated my fond memories of the film to even higher heights. To be honest I think I’ll actually move it up a few places in my Ranking the Marvel Cinematic movies blogpost.

Captain America The First Avenger stands as one of the MCU’s best and if I was purely ranking the movies based on the five I’ve watched at this stage in the Road to Infinity War, it’d be at the top.