As is becoming tradition on MoviePush, I like to pull together a blogpost that ranks my Top Ten movies of the year. 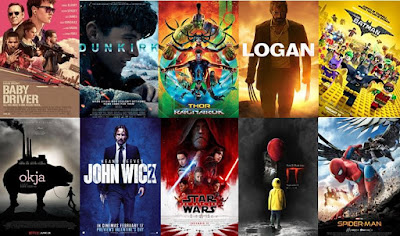 Now to clarify, this is a list of my favourite movies of 2017 in ranking order, so I’m sure you’ll have a different list but these are mine. This has been a pretty difficult list to cut down to a Top Ten, as 2017 has been a phenomenal year for quality films, I even did a blogpost mid-year based on how good the summer movies had been and had to rank the comicbook movies separately! Overall I think 2017 has been one of the strongest years ever for movie releases.

I had a high-level of anticipation for films being released in 2017, and I’m happy to report most of these lived up to my expectations and as a result are in my top ten movies of 2017 (trust me, that is not usually the case).

Unfortunately I haven’t seen Paddington 2, The Shape of Water, The Death of Stalin, The Disaster Artist, Mother! or Lady Bird yet. All of which are supposed to be great, so if I had that might have changed my list, just in case you’re wondering why they’re not included.

So with all the explanations out of the way, let’s get on with it.

TOP TEN MOVIES OF 2017
10 - Okja
I really enjoyed this film, it’s a marvel of a movie, the likes of which we don’t see anymore. It’s technically a family film, yet with some very dark and thought-provoking subject matters you would rarely see in similar films these days. The story of a genetically modified super pig Okja and a south Korean girl Mija, gives us an adventure that is just as heartwarming as it is heart wrenching.

9 - John Wick 2
They don’t make many action movies like this anymore, especially by western film studios. So when one comes along starring Keanu Reeves with this level of action chorography, you have to make the most of it. John Wick 2 lives up to the original and is hugely recommended for any action film fans.

8 - The Lego Batman Movie
Probably the funniest film I’ve seen all year, literally filled with laugh out loud moment every minute. Combined with a truly unique Batman story and hundreds of easter eggs, this is a great film.

7 - Thor Ragnarok
Thor Ragnaork is a hugely entertaining and fun movie. In my movie review of Thor Ragnarok I said it was an absolute crowd-pleaser, which is extremely exciting and funny. It doesn’t quite have the emotional stakes of some of the higher films on this list but it’s still great fun and a very good movie.

6 – Stephen King's It
In short, if Stranger Things, E.T. or The Goonies were R-rated, then you’ll have a pretty good idea of what Stephen King’s It is like. Needless to say, it is a very thrilling adventure film that doesn’t hold its punches, and delivers lots of scares throughout.

5 - Baby Driver
Part musical, part action, part heist movie; writer / director Edgar Wright proves he is one of the most talented and original film-makers working in the mainstream at the moment. This is a truly wonderful film, with an beautiful soundtrack that is artfully edited into the movie (I won’t spoil how exactly).

3 – Logan
Logan ranks not only as one of the best comicbook movies of 2017, but also one of the best of all time. For me, the very best superhero movie’s transcend the genre and can be recommended to anyone who doesn’t generally like superhero movies (trust me they exist). Logan sits with The Dark Knight in terms of comicbook movies that feel like they’re real film films.

2 – Dunkirk
In terms of a cinematic experience, Dunkirk was my film of the year for the longest time, however as I said in my original review I do wonder how Dunkirk would hold up when viewed in any other format outside of a cinema. So much of its impact depends on the sound and the scale of the imagery, and without it I have my doubts as to whether I could truly put this as number 1. That’s not to take away from it, it’s a phenomenal film, but…

1 - Star Wars The Last Jedi
I absolutely loved the latest chapter in the Star Wars saga, ever since I’ve reviewed The Last Jedi I can’t stop thinking about it. It’s so rich with detail and deeper meanings, it constantly challenges and expands pre-established concepts of the universe in smart and interesting ways, and subverts the audiences expectations. It blows my mind there’s such a level of hate towards this film, it’s not perfect (there’s some cringey humour and one side story drags on a bit), but for me it’s easily the best Star Wars movie and also my favourite film of the year.

HONOURABLE MENTIONS
To be honest I could (or should) have done a top 20 this year, as it’s been such a great year, but here are some other movies that deserve honourable mentions (in no particular order): -

Get Out
American Made
Detroit
Kong: Skull Island
Brawl In Cell Block 99
War for the Planet of the Apes
Wonder Woman
Blade Runner 2049
Headshot
Gerald’s Game
Hacksaw Ridge
Pirates of the Caribbean: Salazar’s Revenge (yeah I liked it, so what!)

BIGGEST DISAPPOINTMENTS
As I said earlier, the majority of my most anticipated films of 2017 ended up being pretty great so they’re in my top ten, but the below 3 films did disappointment.

Guardians of the Galaxy Vol 2 and Kingsman: The Golden Circle
Neither of them are terrible films (GOTG Vol 2 is actually pretty good), but unfortunately I didn’t think either of them lived up to their predecessors and I was very much looking forward to them, which is (of course disappointing).

Justice League
My hopes weren’t particularly high following Suicide Squad and BvS, but after some positive PR and marketing I did begin to let myself get hyped for Justice League. However, although not terrible, the final movie we ended up getting was pretty bland and forgettable, and definitely not DC’s answer to The Avengers. As a result, this is nothing short of a disappointment. Fingers crossed there’s an extended or Snyder cut that surfaces in the future.

There it is, my Top Ten movies of 2017, what movies would you rank as your favourites this year?