Star Wars The Last Jedi - My Thoughts And The Fans Backlash

Shortly after its release I posted my spoiler-free review of Star Wars The Last Jedi, now the dust has settled I want to blog my more in-depth thoughts with spoilers. 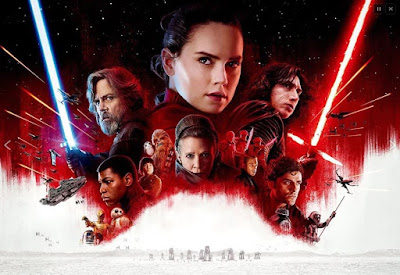 I’m glad I waited a few days to write this, as not only has it given me time to reflect on my overall feelings on Star Wars The Last Jedi, but I’ve also seen the fan backlash and as a result I can incorporate some of that into my thoughts.

In my spoiler-free review I said I absolutely loved Star Wars The Last Jedi. Despite some cringey humour towards the start and a slow middle section, I thought it was a great movie overall that I enjoyed thoroughly. That hasn’t changed, if anything I’ve read/watched some post-release analysis which makes me appreciate it even more.

However, I was really surprised to read or see the negativity around the film, it’s difficult to say whether this is a vocal minority of hard-core Star Wars fans or the general feeling. As the critics seemed to love it and it also received an A Cinemascore (the same as The Force Awakens and Rogue One), which would indicate general audience also like it. Either way The Last Jedi is definitely not receiving the same universal praise The Force Awakens enjoyed.

Yet, for me, The Last Jedi has some of the richest and most interesting story-telling we've seen in the Star Wars universe so far. What is the Force? Do the Jedi have a right to “own it”? It challenges and deconstructs what the Jedi should and shouldn’t do. It looks at what it means to be a legend and the toll that can take on an individual. It constantly subverts expectations, whilst simultaneously mirroring and closing arcs from earlier films and bring things we’ve never seen before to the screen. This is really rich and challenging stuff that works on so many levels, it’s great cinema and it causes great debate. It's a bold new direction for the saga and as a result is the best out-right film in the Star Wars series.

It also has the best relationship dynamic between two characters the entire saga has ever seen. In the form of Rey and Kylo, you’re never quite sure if either one could flip from one side of the force to the other. They also have a mutual respect and understanding for one another, and a desire to bring each other to their respective side of the Force. This is so much richer than the Darth Vader / Luke Skywalker relationship from the previous trilogy.

The cinematography is absolutely beautiful, with some shots being some of the best I’ve ever seen, the red dust flaring up over the salt plains, the hyper speed space shuttle silhouettes, the slow motion to full speed Rey and Kylo fight. All absolutely incredible.

The music... wow! John Williams absolutely nails it, again delivering one of the best soundtracks for a movie.

Yes, there are some really cringey jokes at the start that fell flat (when did General Hux become a bumbling coward?) and the middle section feels a bit like padding, but the final hour is absolutely spectacular and I loved every minute of it. So I really struggle as to how you could hate this film.

I guess some of this comes down to not being able to please all the fans or not meeting expectations of pre-conceived theories. I get it, I’ve seen a number of films where my own expectations for what could have happened didn’t and then it’s difficult to split your disappointment from your own expectations vs reviewing a film on its own merits. Is this happening here, maybe?

It Doesn’t Feel Like Star Wars
Just because it did something new doesn’t mean it’s not Star Wars. In fact, a large theme of the film is moving on from the past and building something new.

It’s well known that despite The Force Awakens being generally well received the biggest criticism was that it was too much like the original trilogy and a re-tread of A New Hope. The filmmakers had a difficult task with the sequel, make it different but still the same. However, I think they were successful as they avoided a complete Empire Strikes Back re-tread, and then they delivered something quite different, yet at the same time still mirrored some of the key themes from the original trilogy's middle chapter.

Disney Ruined Star Wars
I completely disagree. The Disney version of Star Wars is The Force Awakens, it’s the safe version, it takes no real risks and gives fans exactly what they wanted. I love it and it's a great fun, but it doesn't expand the universe or bring anything new to the table. The Last Jedi is bold cinematic story-telling from a visionary director, which challenges the viewer and gives us something new (yeah there’s a few jokes, but this is not a happy go lucky Disney film).

Luke Skywalker
I’ve seen some people take issue with Luke Skywalker in this film, I personally loved the fact we had a somewhat broken hero, who couldn’t live up to his own legend. It’s a challenging notion and people really hate it when you deconstruct their heroes but it leads for a much richer experience. I also loved the fact that he was somewhat responsible for the creation of Kylo Ren, due to a momentary mistake, and the way they revealed that moment from two perspectives was great.

Luke has banished himself away to die on Arch-Tu and says he will never leave, which he doesn’t. Interestingly enough, Yoda did the same thing in Empire. Yoda didn’t leave to help Luke with Vader, and Luke doesn’t leave to help Rey with Kylo. Another similarity with the originals, that I thought was interesting.

However, we still get our Luke hero moment via the Force illusion so the filmmakers give us our cake and eat it, whilst not thematically betraying the character they've created.

Snoke
There was an expectation that Snoke was this new trilogies version of the Emperor, yet his surprise death completely changes is place in this trilogy. It was unexpected, but it now means Kylo Ren can  become an unique villain in the final chapter rather than remaining Darth Vader lite.

Fans also wanted to find out Snoke’s backstory, who he was, why he’s doing this and they’re upset because we didn’t get it explicitly spelt out in the film. That’s not a problem, they’ll be book or comic that expands on this. Hell, you might even find out in Episode IX, this is only the middle chapter after all! But did the Emperor get a massive backstory in the original trilogy? Not really, did people complain they didn’t know everything about his history? No, because they hadn’t spent two years speculating about it.

Rey’s Parents
The great reveal of who Rey’s parents were? Nobody. They were nobody special, I really like this. If she was a descendent of anyone we already knew, it would just make the universe feel so small. The same goes for Snoke really, not every new character has to be related to someone from the prequels. This expands the world and makes it so anyone can be special, no matter you’re bloodline.

Leia Using The Force
Some people seem to hate this? I’ve seen it described as “Leia flying” or “Superman Leia” and that she shouldn’t be able to do it because it hasn’t been done before. Well, that’s what happens when you see something new, you haven’t seen it before. Right? I never interpreted this as Leia flying, in my mind she used the Force to pull herself to the door. If a Jedi can use the force to pull an object towards them, I’m not sure why it’s so hard to accept that if your weightless in space you could pull yourself towards something in this manner.

If you think Rian Johnson doesn’t understand the force, then I guess you missed the scene where Luke talks Rey through it. Seems like he gets it just fine.

Captain Phasma
She’s barely in it. So what? Yes she looks cool, but she’s basically this trilogies version of Boba Fett. The much loved bountly hunter that contributes much less to the original trilogy than Phasma does to this one, yet everyone still loves him. So I think we just need to accept Phasma’s place in the trilogy. People seem to forget the more you include characters like this (characters who are cool based purely on a design), the more they lose their cool. So I’m happy with the short and sweet inclusion, makes it more special.

That seems to be the bigger issues I’ve seen, now to finish with a few more areas not included in the above.

I did miss the fact Finn and Rey were not together in this film, I loved their banter and bickering from Episode 7 and I thought The Last Jedi missed that.

The whole chase sequence and conflict between Poe Dameron and Vice Admiral Holdo went on far too long, and could have been easily resolved if Holdo was just clear on her plan. This sub-plot all felt a bit contrived. It also meant Finn and Rose went on their own adventure, which again was overly-long but I thought it was great to see the 1% of the Star Wars universe and explore a topic that hadn't been discussed before (The First Order and Resistance both buying their weapons from the same people, etc).

One slight concern I have was that it’s clear JJ Abrams was setting up stuff in Episode VII, which Rian Johnson then decided he didn’t want to develop or took it in his own direction. This works great to subvert expectation and mis-direct the audience in this film, but may damage the overall impact of the trilogy as a whole. I like the resolution to Rey’s parents, but I wonder if that answer was always the case, some of the set-up in The Force Awakens implies there was more to it (there are some scenes where Han Solo looks like he knows more then he’s letting on).

Likewise, having Luke Skywalker’s original lightsaber call to Rey and spark a load of visions, why was this? Outside of Rey just being powerful with the force we are yet to know why she was specifically called out. Luke even says as much in The Last Jedi “Yes, but why are YOU here (what’s special about you).”

I’m not too bothered about the Knights of Ren, as although they were mentioned a lot behind the scenes, they’ve never been specifically name checked in the films, and so it’s not really a thread left hanging.

The Last Jedi is a bit of an oddity, in some ways it does very much feel like a middle chapter, yet at the same time it does resolve quite a few things and really wipes the slate clean with Luke, Leia and Snoke all gone, I don’t have a clue where Episode IX will go. We’re clearly not going to be re-treading Return of the Jedi and this is somewhat exciting! We know JJ Abrams is coming back, so I’m sure he’ll want to tie in some of the stuff he set-up in The Force Awakens that hasn’t been resolved yet. As a result it will probably make the trilogy feel much more cohesive once it’s completed.

It’s rare in this day and age to not know a franchise roadmap or what it’s ultimately leading too, and it feels somewhat refreshing and very exciting! It’ll also be interesting to see if the fan backlash plays into the Episode IX story at all.

Star Wars The Last Jedi is bold and cinematic in a way we've never seen in a galaxy far, far away, and as result it's the best Star Wars movie ever made.