It’s been a huge year for movies, but I think we can safely say the biggest has been saved until last… Star Wars The Last Jedi is finally out. 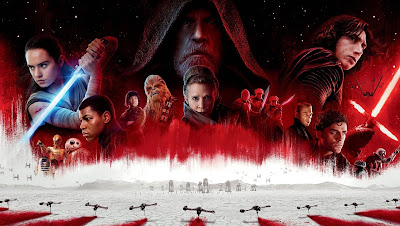 Here are my thoughts…

Firstly, I think a bit of context for where I’m coming from before I detail my thoughts on Star Wars The Last Jedi.

Star Wars has never been a huge part of my movie fandom, yes I love big-budget blockbuster movies and I do like the Star Wars movies (the original trilogy, not the prequels - they are terrible and haven’t got any better with age). But Star Wars was never my thing, between the two LucasFilm franchises of the 80s I was much more an Indiana Jones fan, and I’ve always been more into superheroes and cops and robbers type stuff (Batman, Superman, James Bond, Lethal Weapon, Die Hard and Indiana Jones were the top things I was into growing up).

Now saying all that, I absolutely loved Star Wars The Force Awakens, it was my favourite film of 2015 (a year that saw new releases of Avengers and Bond films). I know it’s cool to hate on TFA because it retreads a lot of the original trilogy, but then I’m not really sure why people complained about that, it’s more of what you love with modern film-making, that’s not a bad thing. It served a purpose, it had to reintroduce people to the franchise and remind others why they loved Star Wars in the first place. Just watching the film in cinemas, it felt special, seeing a new Star Wars movie with original cast together with new characters setting out on a new adventure. It genuinely was magical, and I loved it.

So my overall Star Wars fandom wasn’t huge, but I was genuinely invested in the characters of the new trilogy and couldn’t wait to  see how it continued.  I was genuinely excited to see how Rey, Finn and Kylo’s story developed in Episode VIII, and therefore Star Wars The Last Jedi was my most anticipated movie of 2017.

I resisted the urge to read any previews, reviews or features of the film. I even muted Star Wars and The Last Jedi related words on Twitter so I didn’t accidently read any spoilers. I only watched the trailer a couple of times when they first came out, so I was going in fairly clean.

So here we are… I’ve finally seen Star Wars Episode VIII The Last Jedi... and I've got to say I absolutely loved it. I came out of the cinema on such a high and in some respects blown away! It's difficult to discuss what I really liked without spoilers, so I'll keep this spoiler-free review short.

Now it wasn't all great, I was not a fan of some of the cringey humour at the start of the film, some of the jokes felt extremely forced in (no pun intended) and they definitely didn't land with the audience I watched it with.

The middle section of the film felt overly long, but a lot of this is set up for a spectacular final hour so that can be accepted. I think I preferred The Force Awakens overall as I was constantly engaged from start to finish, but I think the final hour of The Last Jedi is more exciting than the final hour of TFA. It genuinely tries something new and the action sequences are incredible, however it's difficult to go into specifics without spoilers...

I really like the dynamic between Rey and Kylo, some of the best relationship building that's ever been in any Star Wars film, and a really interesting take on the light and dark side of the Force. There are some fight sequences and shots in this film that are absolutely incredible, with really great cinematography.

Minor spoiler - Finn and Rey don't really spend anytime together in this film, I loved the banter and bickering between the two of them in Episode VII and that was missing here. Just a small gripe though.

I've seen some Star Wars fans absolutely hating on this movie, and after reading some of their comments I think I can understand why. However, as I'm not a huge Star Wars fanatic, a lot of the things that's being called out didn't bother me. I just appreciated it as a really great time at the cinema, and as I said I absolutely loved it.

I am also genuinely intrigued to see where they go with Episode IX, there are some surprises and outcomes in this movie that I really thought would have been saved for the final chapter. So it will be interesting to see how they build on these.


Well that's my spoiler-free review of the film, I've also written a spoiler-filled blogpost on Star Wars The Last Jedi including discussing the fans backlash.

Let me know what you thought of the film!