Jurassic World Fallen Kingdom Movie Trailer Has The Most Marketing Ever

In case you didn’t know, Universal Pictures would like you to know Jurassic World Fallen Kingdom has it’s first teaser trailer coming out on Friday (tomorrow as of writing). 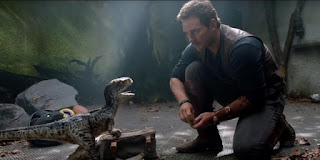 It’s not unusual for a new movie to have a blitz of marketing ahead of its first trailer release. But the amount of marketing being put into announcing the Fallen Kingdom trailer is unprecedented.

We usually get an exclusive magazine article / cover story, maybe a teaser poster or image, and in recent years a short teaser clip of the trailer itself. Avengers Infinity War marketing started last week and followed a very similar pattern.

But I’ve never seen the amount of marketing like that which Universal Pictures has put in place for Jurassic World Fallen Kingdom this week.

We’ve had all the basics as I’ve mentioned already, but let me list everything I’ve seen to market the movie trailer. 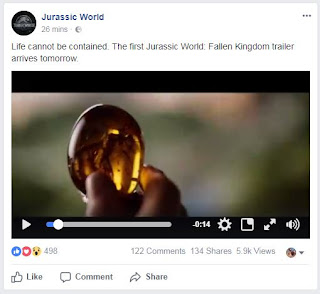 Let’s just re-iterate, that is ALL for the release of the TEASER TRAILER. Not the movie, not even a full trailer. That’s more marketing and advertising than most films get for their full release.


To be fair, it's been pretty good, especially the "Behind the Scenes" feature and the "Zack King trailer tease". See both for yourself below...

However, I am concerned that if we’re already seeing this much promotional material, by the time the movie comes out (not until next June) we will have seen far too much of this movie.

Either way, there’s no doubt, Universal Pictures is going all out on marketing  Jurassic World Fallen Kingdom.

UPDATE - 08/12/2017
And here it is! After all that marketing, here's the first movie trailer for Jurassic World Fallen Kingdom.
Initial impressions...

It looks pretty good, I do get a Jurassic Park The Lost World vibe in terms of the story premise of returning to an abandoned park. I think they're holding quite a lot back as it seems like most of the action of the trailer is all set around one sequence, but that's not a bad thing, I don't want the movie ruined for me.

Looking forward to this!