Thor Ragnarok - My Thoughts With Spoilers

I’ve recently blogged my Thor Ragnarok movie review on MoviePush, however I purposely didn’t include spoilers as I really don’t want to ruin it for anyone. So if you just want to read my spoiler-free thoughts on Thor Ragnarok then take a look.

However, any new film in the Marvel Cinematic Universe demands to be discussed and written about, and the only way I can do that in detail is with spoilers! 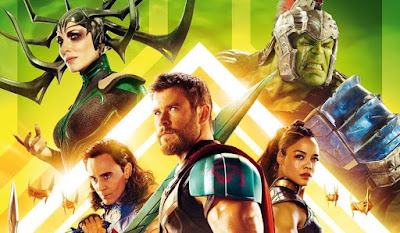 So here are my spoiler-filled thoughts on Thor Ragnarok…


First, I will admit I was a bit nervous during the first 10-20 minutes of Thor Ragnarok, there’s the chain gag which although very funny felt a bit out of step with the tone of the wider Marvel Cinematic Universe and this is quickly intercut with a skit of Karl Urban’s Skurge trying to impress two Asgardian with his guns “Des” and “Troy”.  Then, once we are back in Asgard, there are two quite distracting cameos – namely Matt Damon and Sam Neil re-enacting the events of Thor: The Dark World in an Asgardian theatre production. All of these moments were funny on their own but pulled me out of the movie and made me think that Marvel may not be taking the film very seriously.
This then conflicted with Thor meeting Dr Strange. Chris Hemsworth was very much playing the “new Thor” of Thor Ragnarok (much more playful and arrogant), but against Benedict Cumberbatch’s Dr Strange, who is mostly playing it straight it just didn’t work for me.

These two clashing of tones, got me concerned that the movie could be all over the place. Fortunately once Thor and Loki meet Odin, and Hela is introduced I felt the film really got the balance right and it all flowed together great from there.

To be honest, those first 20 minutes are my only real critique of the film, once it settles in and you go along for the ride it’s one hell of a fun film.

So on to some specifics I’d like to discuss…

The big spoilers – Hela The Goddess of Death is actually Thor and Loki’s sister! I didn’t know this going in and I don’t think this is from the comics (I’m pretty sure its new for the MCU but haven’t read a huge amount of the Thor comics so I could be wrong). Either way, I really liked this, it creates a great dynamic between the three siblings and also deepens the relationship between Thor and Loki. The brothers now have something in common, that their father hasn’t always been completely honest with them. Odin and Hela ruled the galaxy/realms together and the implications this has on Asgardian history are very interesting.

As a result of this, it gives Hela strong and clear motivations as to why she believes she should be the ruler of Asgard and has a direct personal connection to Thor. Combined with Cate Blanchett’s great performance, we have one of the strongest villains in the MCU.

I do wonder if Hela will return for Infinity War as well. In the Infinity Gauntlet comic (what Infinity War will loosely be based on), Thanos is motivated by pleasing Lady Death. Although not technically the same character, the similarities between Hela and Death are too close to not think she may be included.

Bringing Hulk in to the fold was a great decision, and counters the Captain America / Iron Man headliner of last year’s Civil War. However I do wish the Hulk inclusion had been kept a secret, I understand from a marketing perspective why it would likely never be. But can you imagine the reaction of audiences if you didn’t know Hulk was in the film and then he bursts out in the coliseum? It would be incredible. The film also loses this surprise, there are few comments leading up to the fight where people reference “the champion” and not knowing who he is, but obviously as an audience we already know so it kills some of the suspense.

Hulk being able to speak is also a fun decision, the banter between Thor and Hulk is hilarious and so enjoyable to watch. This version of the Hulk is definitely the best we’ve seen so far and I hope it carries over into future MCU films.

Thor loses his eye in the climatic fight, and although not a game changer there’s definitely going to be some clear growth in the character moving forwards. Thor now looks more war torn and obviously has key resemblance akin to his father Odin now. This was a genuine surprise as the shot in the trailer of Thor with the glowing eyes was altered from the final film (where he only has one). This was pretty cool as when Hela first did it, I assumed it would come back (due to some Asgardian magic or whatever). So when I realised they were committed to this, it was genuinely dramatic.

Talking of things in the trailer that aren’t in the final film, this shot in particular isn’t anywhere to be found… 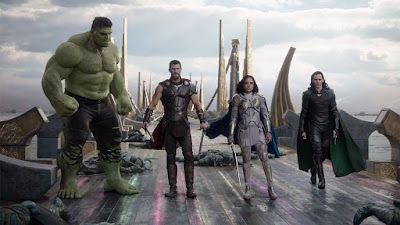 Thor Ragnarok was always billed as the Phase 3 movie that will change the rest of the MCU films going forwards. Similar to Hydra's infiltrating and destroying S.H.I.E.L.D in Captain America: The Winter Soldier in Phase 2.

The big event is that Asgard is destroyed! However, I’m not sure this will have quite the same impact as S.H.I.E.L.D being disbanded. Primarily because Asgard was only ever featured in the Thor films so feels very specific to them not the MCU overall. Whereas S.H.I.E.L.D had featured in pretty much every Marvel film prior, so it had a Much greater impact. More an observation than a criticism.

Finally, a small thing but I love the fact Hela addresses the Infinity Gauntlet in Asgard as "Fake!" That plot hole of the MCU is addressed and sorted then..

I specifically haven’t discussed the post-credits scenes here as I wrote a separate blogpost on them,  Thor Ragnarok End-Credit scenes explained, so take a read if of interest.

I haven’t covered everyting, but these were the main things I wanted to blog about for my Thor Ragnarok spoiler-filled thoughts.

Is there anything in particular you loved or hated from Thor Ragnarok?