If you've seen Justice League you may be wondering what the post credit scenes mean, well I'm here to help. 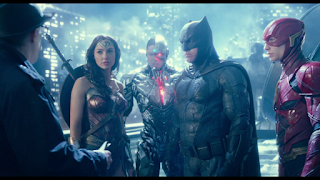 I’ve written up details of the Justice League post-credit scenes, together with explanations for what they mean below (obviously this includes spoilers so do not read unless you’ve seen Justice League!)

A newly returned Superman and The Flash decide to have a race to the Pacific coast. Although we only see the the start of the race, most of the scene focuses on the banter between the two and Superman teasing The Flash just before they start.

This scene is played purely for laughs and really demonstrates Warner Bros moving the DCEU into much lighter tone.

JUSTICE LEAGUE END-CREDITS SCENE
This is the main scene, which actually teases a potential plot development in a future film.

We start in prison (what I assume is Arkham Asylum), with a prison guard shouting to Lex Luthor. We only see Lex from behind and he doesn't respond, as we get closer and he eventually turns around, it's revealed the person isn't infact Luthor but a crazy bald inmate.

We then cut to a speedboat heading towards a luxury liner, here we see Deathstroke (a famous Batman villain) step off the speedboat and walk up to none other than finely dressed Lex Luthor. Luthor references Superman is back and that the Justice League has been created, teh scene ends with Lex saying to Deathstroke "I think we need a league of our own.."

Obviously, this hints at Lex pulling together a team of his own. You could argue a team of super villains already exists in the form of the Suicide Squad, but they wouldn't be capable of taking on the Justice League (not powerful enough). So we have to assume this is a new team, which could feature some of the SS, maybe Deadshot and Harley Quinn. Alternatively this would be a host of new villains to be introduced to the DCEU. However anyone powerful enough to take on the JL could arguably be the central villain for future films, without having to team up.

In all honesty, I'm disappointed with these post credit scenes. We know the original plan for the Justice League film was to end with Darkseid coming to Earth. So it would have been great to tease that here, I'm not really too bothered about another team up.

Likewise where's Green Lantern as in Hal Jordan / Jon Sterwart, we saw the Lanterns briefly earlier in the film and I would assume if there's a Justice League sequel they'd be introduced, so again would have been great to tease them here.

Well that’s the details of the Justice League post-credit scenes, what did you think?

If you also want to read my overall thoughts on Justice League with a non-spoiler section as well as lots more details (and spoilers) check here.