This review is spoiler free and therefore is relatively short. It just gives my general feelings on the film overall, if you want to read my more in-depth spoiler-filled Thor Ragnaork thoughts they're here. 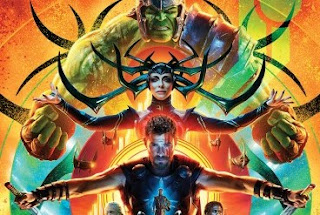 To say I was excited for Thor Ragnarok is an understatement, Marvel are currently producing some of my favourite movies and the fact Taika Waititi is directing got me very excited. The marketing for Thor Ragnarok has also been extremely good and has been selling another fun-filled action adventure with some quirky twists.

So does it deliver…

Most definitely, Thor Ragnarok is a crowd-pleaser, it’s funny, exciting, full of action and with just
enough emotion to not make it feel like mindless spectacle. The audience I saw it with were constantly laughing and having a great time. This seems to be the standard for Marvel Studios movies at the moment.

Whereas Iron Man 3 was very much a Shane Black movie (the writer / director), Thor Ragnarok is most definitely a Taika Waititi movie. His quirky New Zealand-esque humour is sprinkled through-out the whole film and really makes Thor Ragnarok feel like something different to the norm. Yes, the standard tropes and clichés are here, but they’re all spun on their head and positioned in unique and interesting ways. No decision is made that will be quite as divisive as Iron Man 3’s Mandarin reveal, but there’s enough here to make the film feel fresh.

All of the characters are great. Literally everyone. Thor and Loki are great but somewhat known quantities, but it’s the new additions; a talking Hulk – genius. The Grandmaster – so eccentric and quirky. Hela – one of the best Marvel villains so far. Valkyrie – strong, brave, drunk. Korg – funny, scene-stealer. If anyone gets short-changed it’s Idris Elba’s Heimdall, but even so the majority of the cast are really great.

I don’t want to go into story details (I’ll save that for the spoiler blogpost), but I will say I was impressed how the plot all weaved together. After watching the trailers I was concerned that there appeared to be so many elements that it could have been a bit of mess, but thankfully it’s not. I did feel the first 20 minutes or so was a bit sporadic, and there’s a cameo that although cool wasn’t really necessary, but once the story proper gets going it all works great.

This is easily the best Thor film, I’m not sure I can decide where it’d rank against other Marvel movies just yet, it’s not quite top 5 for me, but definitely in the top half.

As with all Marvel movies you’d be hard pressed not to enjoy it.