As with any new movie in the Marvel Cinematic Universe, we fans look forward to the end credit scenes, with this comes lots of speculation about what they mean and where they could lead! Thor Ragnarok is no different. 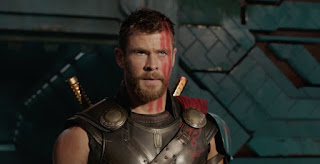 Thor is confident and reassuringly says “Brother I think we’re going to be ok.” As Thor finishes his sentence, a shadow ominously rises over them and a huge spaceship is revealed to be rising in front of them. Cut to black…

This is a relatively short scene, but it gets me super excited! This is most definitely an early scene from Avengers: Infinity War and that ship belongs to none other than Thanos.

We know based on the preview footage of Avengers: Infinity War, Thor is floating through space when he meets the Guardians of the Galaxy. I’d suggest this early encounter with Thanos doesn’t end well for the God of Thunder and results in him being stranded in space.

What happens to Loki, Hulk, Valkyrie and rest of the Asgardian is yet to be known…

It doesn’t really serve much purpose other than to leave a smile on your face.

Well that’s the details of the Thor Ragnarok end credit scenes, what did you think?

You can read my full non-spoiler review of Thor Ragnarok here.

Or you can read my full spoiler-filled thoughts on Thor Ragnarok here.