I wrote a blogpost a few weeks ago on how 2017 has been the best year for quality summer movie blockbusters, and as we now approach the end of the summer I thought I’d tally up my top 6 films of this summer. 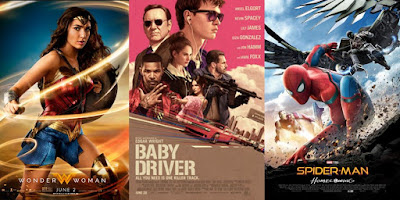 Why 6 you ask? Well, I was going to do a top five, but then as there have been so many incredible films this summer I had to increase the list to highlight these six! So what are they...


To be clear, these are my favourite films so won’t necessarily be ranked in terms of Rotten Tomatoes review score or anything like that. Also, this is not restricted to purely cinema releases, we live in the 21st century and we should therefore acknowledge that great original films get released directly on service like Netflix and Amazon  (instead of being released in the cinema).

So here we go…

6) War For The Planet Of The Apes
The title is somewhat misleading, this is not the all-out war movie I think many of us were expecting. It is a much more intimate and thought-provoking drama of a movie. A more fitting title would probably be “Prisoner of War Of The Planet Of The Apes” but then I guess that’s a bit too long.

However, looking at this film for what it is, it’s still an absolute gem of a movie. Andy Serkis puts in an amazing performance again, as we’re taken on an emotional tale of revenge and inner conflict. The special effects are also absolutely incredible.

I think I prefer the 2nd film (Dawn of the Planet of the Apes) out of the whole trilogy, but that’s not stopping this being a great piece of film-making.

Wonder Woman is a step up on anything that has come before, and it’s really for the most obvious reason, it has great likeable characters, a compelling story and some exciting action. It’s everything you want in a summer blockbuster. Gal Gadot is the definitive Wonder Woman, and this is no surprise if you’ve seen Batman v Superman where she absolutely stole the show.

I do have a few problems with the last 20 minutes, the twist with the villain and the final fight sequence turning into bland CGI pulp hurts the film slightly, but overall it’s great fun.

4) Okja
Well this is the reason I put all the stuff about Netflix movies being included in the list. I really enjoyed this film, it’s a real marvel of a movie, the likes of which we don’t see anymore. It’s technically a family film, yet with some very dark and thought-provoking subject matters you would rarely see in similar films these days.

The story of a genetically modified super pig Okja and a south Korean girl Mija, gives us an adventure that is just as heartwarming as it is heart wrenching, and therefore creates a very unique film. One of which I highly recommend.

Part musical, part action, part heist movie; writer / director Edgar Wright proves he is one of the most talented and original film-makers working in the mainstream at the moment.

This is a truly wonderful film, with an beautiful soundtrack that is artfully edited into the movie (I won’t spoil how exactly).

1) Dunkirk
Likewise I wrote a full blogpost on Dunkirk being the ultimate cinematic experience. As a result it’s my top film of the summer, I have doubts as to whether it would stand up on any other format except in the cinema, but then we’ll have to wait and see. I enjoyed this so much I actually went to see it twice.

If you haven’t seen it yet, I highly recommend you check it out whilst it’s still in the cinema.

I did also enjoy Pirates of the Caribbean: Salazar’s Revenge and Alien: Covenant, however as these movies felt just like modern day remakes of earlier films in their respective franchises, I didn’t think I’d include them in the top six.

So that’s the list, what were you’re top movies of the summer?