I hadn’t expected to see Stephen King’s It this weekend, but by chance I managed to get to a showing on Saturday afternoon and I’m really glad I did. 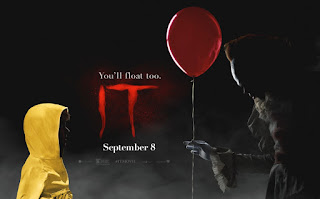 Read on for my thoughts on Stephen King’s It, the remake of the 1990 TV movie and novel adaption, with NO SPOILERS.


In short, if Stranger Things, E.T. or The Goonies were R-rated, then you’ll have a pretty good idea of what Stephen King’s It is like. Needless to say, it is a very thrilling adventure film that doesn’t hold its punches, and delivers lots of scares throughout.

(FYI I’ll just refer to the movie as It now.)

There’s been a lot of hype on the lead up to It, the marketing has been really good and I was pretty surprised that a blog post I posted last week comparing the It movies posters (remake vs original) was one of the most read posts I’ve ever written. Early reviews had also been exceptionally good, so I was really looking forward to it.

But, I wasn’t expecting it to be this good, it is genuinely one of the best films I’ve seen this year and it feels quite unique. It’s unlike any “horror” film I’ve watched before, it’s constructed almost like a high budget action movie with a succession of set-pieces, but rather than car chases and gun fights, we have small scale scares, mutilated corpses and killer clowns chasing our protagonists.

What’s great though, is that it takes the time to develop all of the characters individually. However, the nature of the scares and horror sequence are cleverly interspersed, so it never feels like the film is dragging or wasting time. As a result you’re on the edge of your seat for the majority of the films run time, whilst continually building your emotional connection to the characters.

Also, to call It a horror film feels a little wrong, it’s definitely creepy and has scares, but it really does feel like an 80s childhood adventures (Stranger Things, E.T., etc), they just happen to be dealing with a much more adult threat. Helen O’Hara describe it on The Empire Podcast “if the goonies had to deal with Freddie Kruger” and I’d 100% agree with that.

There’s also been lots of praise given to Bill Skarsgard’s take on Pennywise and he is absolutely phenomenal, again he plays it more creepy than scary. But all the children that make up The Losers Club are fantastic actors too, and it’s these characters and their back stories that elevate this movie to great. As mentioned earlier, each character gets a decent amount of time dedicated to their situations, some of which are even more unsettling than Pennywise himself.

I won’t ruin any of the “horror sequences” but pretty much all of them are brilliant, they’re very clever in concept and executed chillingly. Playing on the fears of the individual characters allows for a decent amount of variety in these sequences.

Overall, Stephen King's It is a great film and I highly recommend you see it. Based on the opening weekend box-office I thing it’s going to be a huge hit and people will be talking about this for years to come.