Kingsman: The Golden Circle is a fun film, but it's not a great film. 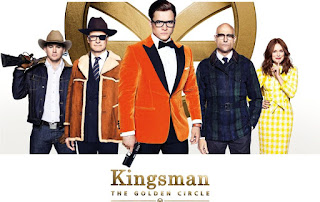 I absolutely loved the original Kingsman: The Secret Service, it was a fun and interesting take on the spy genre, which really pulled the light-hearted feel of 60s era spy films into the modern day. It was also a great origins story for the lead character Eggsy (Taron Egerton) and an introduction to the Kingsman spy agency.

So my expectations for the sequel were very high...
Kingsman: The Golden Circle carries over the original's fun, amazing fight sequences, inventive gadgets and funny character moments but not the heart or the originality. The budget is clearly bigger and most of this has been used for more elaborate CGI heavy action scenes (however nothing tops the church scene from the first).

My biggest issue is in the film’s structure itself, there's just something off about it. The best comparison I can think of is Quantum of Solace (a film I enjoy but don't love). In that, scenes just follow each other, characters just go from place to place and things just happen, it doesn't feel like there’s an overarching or cohesive narrative structure being laid out.

Side characters join and leave the film as required, but never feel like they’re truly part of the ensemble cast (Channing Tatum being the prime example). The film interchanges from including Agent Tequilla and Whiskey, and I can't help but think if these characters had been merged into one role it would have been better overall.

Similarly to Quantum of Solace, the Golden Circle starts pretty much in the middle of a frenetic action sequence. This is well produced, but because it begins so quickly we’re not really invested in the character and it just happens in front of us. It truly is empty spectacle, again its fun but doesn't really serve a narrative purpose. To be honest I thought the cinema had skipped the first five minutes of the film when it started.

From there the film just keeps going from scene to scene, spectacle to spectacle. It also feels a lot more cartoonish, not only in execution but with the characters themselves. We have robot dogs (seriously), a villains lair in a volcano complete with 50s style diners and a weird cameo from Elton John. Apparently its funny to watch Elton John say "f*ck" alot, because it's a "joke" repeated every time he appears in the film.

I appreciate the last few paragraphs are quite negative, don't get me wrong, Kingsman: The Golden Circle is a lot of fun and I enjoyed my 2 hours watching it. But I can't see it being on my top ten list this year, which is a shame considering how much I was looking forward to it.

In terms of the positives, the fight/action sequences are incredibly well choreographed and shot. Even though they're extremely frenetic, it's always clear what's going on. The lead Taron Egerton carries the film and he's great to watch, even in a movie where he's the least well known actor he stands out and hold his own.

The film ends clearly setting up a third, which I'd happily go and see, I just hope it's more in line with the quality of the first.