Re-Looking at Guardians of the Galaxy Vol 2

I’m not going to lie, the first time I saw Guardians of the Galaxy Vol 2 I wasn’t impressed. So much so that when I included it on my ranking of the Marvel Cinematic Universe list, it was pretty low. I really enjoyed the first film, it’s definitely one of the MCU’s strongest, but in my mind the sequel really didn’t live up to it. 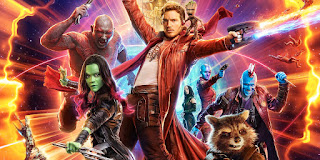 However, I recently purchased GOTG Vol2 on Blu-ray (to be honest it was a begrudging purchase for me wanting to own all of the MCU) which I gave a re-watch this week, and my opinion has improved…


I still don’t think it’s better than the original, nor would I change the position on my ranked MCU favourites lists but I did enjoy the film significantly more than I had in the cinema. As a result I thought I’d blog my thoughts on Guardian of the Galaxy Vol 2. As viewing it with modified expectations definitely helps, and you accept the film for what it is, rather than what I thought it would be.

My biggest issue originally was the decision to split up the Guardians into smaller groups for the majority of the film, the film is at its strongest when the core group are working together but also bickering. When they’re separated you lose this aspect. I did however, appreciate that by splitting them up you get individual characters expanded. But it’s still much better when they’re working as a team at the start and end of the film.

The main characters of which I’d say there’s seven (?) all get time to shine and build out who they are and what makes them great. There’s still some questionable decisions around Rocket’s dialogue earlier in the film that makes him look like a complete jerk, but this is somewhat resolved by the end as his relationship with Yondu develops.

I was also surprised that there’s not really any variety or stand-out action scenes / set pieces (outside of the intro credit sequences). The first film had Star Lord’s introduction, the prison escape, the mine-planet Knowhere space battle and the Battle of Xander (which is a mix of air combat and on the ground fighting), all well placed throughout the film and very different. In the sequel, you have the aforementioned intro sequence, then a mini skirmish as our heroes escape the Sovereign race, but then literally nothing until the final climax of the film. There’s a few; Yondu crew get hit by some of Rocket’s traps, Yondu’s dart slaughter and a quick fight between Gamora and Nebula, but no huge sequence that leaves an impression.

Overall, it feels like a much smaller film in scale compared to the original (rare for a sequel). Yes, there’s technically a plot to take over the galaxy (sort-of), but it’s not front and centre, and the climax of the film is really just father v son. For the final two acts of the film, we’re also pretty much exclusively set on one location, again rare for sequels that tend to want to go to multiple places. In that regard I suppose it should be commended for focusing on character rather than multiple locations and set-pieces.

So overall I have a better opinion of Guardians of the Galaxy Vol 2 than I did after my first viewing, and based on the multiple post-credit scenes, I do wonder where the Marvel Cinematic Universe will go in Phase 4.

Email ThisBlogThis!Share to TwitterShare to FacebookShare to Pinterest
Labels: Guardians of the Galaxy, Movie Review