“I’ve got an idea, let make it dark and gritty. That worked for Batman and made us loads of money, so let’s do the same for Superman...” is how I imagine the conversation started at Warner Bros when discussing a Superman reboot.

Well this promo picture giving us the first look as Henry Cavill as Superman does nothing to dispel that theory.
Don’t get me wrong the costume looks cool, and it looks like they’ve taken a page from the Spider-Man book of costumes with the leathery pin dots all over blue sections of the costume. It definitely makes the costume look much more modern compared to the suit in Superman Returns. 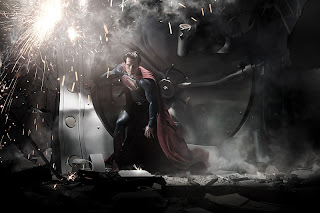 I’m hoping the darkness of the image is more to conceal the full costume reveal, rather than reflective of the tone of the film. Superman should not be a dark film, I definitely want a film thats more exciting and dramatic than returns, but it doesn’t need to be gritty.