Why Are Self-Aware Super-Hero Movies Performing Poorly At The Box Office?

Scott Pilgrim Vs The World opened in the US this weekend with relatively poor returns. It only reached No 5 in the North American Box Office Chart with a mere $10.5million in till receipts, so it has a little way to go before it even re-coups it’s $60mil production costs plus however much Universal paid on marketing the movie. 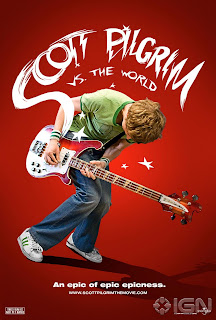 However this isn’t the first film in the genre that hasn’t met industry expectations, it follows in the footsteps of several other “self-aware” comic book and super-hero movies that have also underperformed at cinemas. Kick-Ass and Watchmen both delivered box office results that were far below predictions. Which leads MoviePush to ask why?

All these movies have had very strong and expansive marketing campaigns supporting them, with several teasers and trailers, multiple posters, billboards, online and viral campaigns helping push the movies in to market. They’ve also all benefited from solid reviews and critical acclaim. Yet come opening weekend they have failed to meet the heights expected of them.

Now the traditional super-hero and comic book movie is generally a genre that pays dividends to big movie studios. Yet when movie-makers take the genre and flip it on its head or give it a bit of twist with scripts that break the forth wall and knowingly play with the rules, mainstream audiences don’t seem to respond. Are cinema-goers not ready for this additional level of intelligence in their comic-book movies or are they much happier to follow the cliché’s and origin stories of the standard super-hero flicks?

Or do mainstream audiences just not want comedy mixed with their super-heroes? Mystery Men tried a similar thing in 1999 and fail flat when it opened. Now you could argue that in 1999 audiences hadn’t been exposed to enough super-hero movies to really understand the rules and set-ups to fully understand or get a film mocking them. But in 2010 audiences have been fed a steady supply of comic book movies for the last 10 years to know what themes these films are playing on.

Now Scott Pilgrim and Kick-Ass both mixed comedy with the action and consumers didn’t rush to theatres. Watchmen didn’t use comedy but it was self-aware with a very serious tone and it still didn’t set the box office on fire (granted it performed better than SC and KA, but it was no Batman or Spiderman).

So is there any hope for this genre and the question now stands will Movie Studio’s deter from producing more of these type of films or keep to the traditional superhero format?
Posted by Ripblade at 21:50