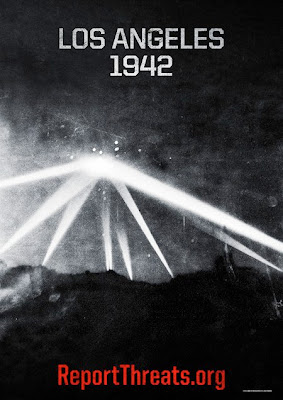 The posters take a viral approach to promoting the film with a heavy focus on the ReportThreats.org website and the hope that word-of-mouth will push the movie instead of the traditional big title and release date text which you'd usually find on most posters.
Battle: Los Angeles will star Aaron Eckhart as a retired Marine staff sergeant who must face his biggest challenge when extraterrestrials and unknown forces attack around the world and turn the streets of Los Angeles into a war zone. These posters play into the films back-story that aliens have been visiting earth for years to scout for an opportune moment to attack (each poster features key dates across the last century).

However, the great thing about the posters (rather than the vast amount of little teases within them) is the website it encourages you to visit. Playing into a relatively new theme that many films (including The Dark Knight and Cloverfield) have used is to promote their films virally by creating website that are run by fictional agencies that appear within the film they are marketing. In this case the site is for W.A.T.C.H. (World Assessment of Threats Concerning Humankind) an agency whose goals (as per their mission statement) are to: -

1) Inform the public of extraterrestrial danger

2) Plan and prepare for impending attacks

The site is relatively new but already contains loads of virtual content with 33 news article detailing UFO sightings, eye witness testimonials and expert analysis videos. This is all good fun and if you’ve got a bit of spare time it’s worth giving a look, but the big question is will this fictional agency website help increase market awareness of the film and more importantly will it drive movie-goers to theatres in March 2011 when the film opens?

It’s a long time yet before the film launches but it will be interesting to follow how this website evolves as the more traditional movie elements (trailers, billboards) start becoming a part of the marketing of the film.
Posted by Ripblade at 21:08