A new poster has been released to promote the upcoming movie Monsters. 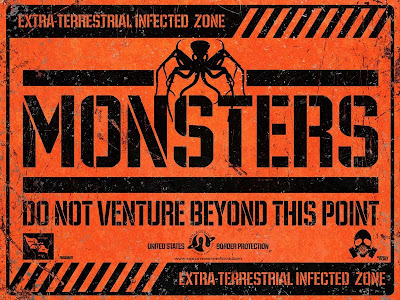 With this first look the advertising campaign seems to be taking a very similar approach to District 9 using warning signage to highlight the release to customers. If you remember, District 9 used the same tact with “For Humans Only” and “Human Only Zone” which they used on a variety of billboards, bus stops, phones boxes, etc to promote the movie. An idea that worked extremely well for them and it isn’t surprising that Monsters would follow suit. Both movies had relatively low budgets compared to what would usually be associated with a large scale sci-fi films so it’s interesting that they both take the same approach to marketing themselves.

Monsters premise is that six years ago, a NASA probe landed back in the New Mexico desert containing samples of alien life - which promptly grew, proliferated and turned the southern US and north of Mexico into an alien-occupied zone. Now, a US journalist agrees to escort an American tourist back through the no-man's land to safety.

This is just a teaser poster at this stage, but I look forward to seeing the campaign when it’s in full swing and if will have Monster warning signs appearing all over our public transport routes.
Posted by Ripblade at 21:07