Marvel have released a new Thor image online, predominately featuring Anthony Hopkins as Odin, with Thor and his evil-twin brother Loki in the background. 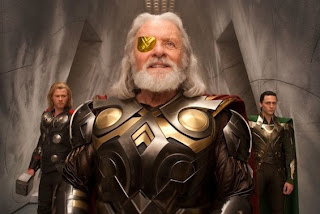 Although you can’t really judge a film based on a few promo photos, Marvel seem to be taking a very different approach with the look and feel of this film, compared to recent super-hero outings. Gone are the dark silhouetted character posters that would usually tease a new super-hero movie. The images so far have all been very well lit and bright. Although this allows you to see the suit clearly, it doesn’t really leave much to the imagination and dare I say it even cheapens the look of the film.

The Dark Knight promoted a very dark/gritty vibe (and so did the Hulk to a certain extent) and even though Iron Man was a little brighter it still felt half-real. Based on the promo pics released so far, Thor feels a bit “made for tv” fake rather than a big-budget movie. The suits themselves look plastic and over-bling, something that some good lighting could have made look incredible.

Is anyone else being heavily reminded of Flash Gordon with this as well? I guess we’ll have a better idea of how this is going to play out when we see the first trailer and we can actually see the suit in action. But it is still a year away before the film’s release so hopefully they make it a little darker by then, right now the best way to describe the images are pop-corn.

Maybe that’s the vibe Marvel want, so to completely separate Thor from all the other dark super-hero movies that have recently saturated the market (especially after the success of The Dark Knight). Is this a brave mood or

The other thing Marvel need to consider in the long-term is how all the films themes and styles tie into The Avengers movie (due 2012)...
Posted by Ripblade at 22:24