Earlier today the Twitter’s @earlybird account was updated with its first promotional tweet. It was in conjunction with Walt Disney Studios to support the US release of their new film The Sorcerer’s Apprentice. 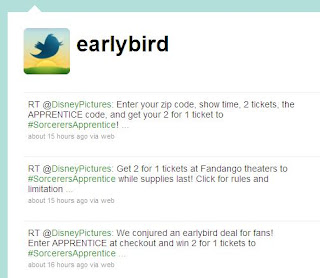 If you’ve been keeping an eye on Twitter@earlybird account, you’ll already know Twitter plan to use the account to work with partners as a group specifically designed to give its followers exclusive offers and promotions. This particular deal allows followers to get a special 2 for 1 deal on tickets for The Sorcerer’s Apprentice.

Brands and advertisers regularly use Twitter to promote themselves; however how big of an impact and how many physical sales are being driven by this is debatable. A lot of followers use social-media to interact rather than be sold to, but with @earlybird the account is specifically set-up to send follower promotional messages. Therefore this could give @earlybird a big advantage as people are choosing to follow so they can be advised of these sorts of promotions.

It will be interesting to see what take-up Disney and Twitter get from this.
Posted by Ripblade at 13:34